Jaap sent in an interesting item recently. This is a magazine card pre-printed by Netherlands Post and sold to Philatelie magazine. The card is then addressed and dated by the magazine publisher to be used as postage to mail the magazine to subscribers. The card shows Eierland Lighthouse which is located on Texel Island. 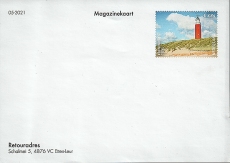 Here are two stationery items that were released in 2015. The first, from Japan, shows a lighthouse at the upper left. The German postal card shows Moritzburg Lighthouse at the left as well as the stamp issued in it’s honor and the first day cancellation dated 11 June 2015. 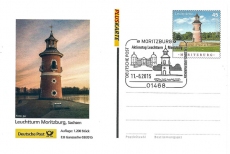