Mike DePaz sent in these three interesting postmarks from Cuba that he received from Luis Alberto Castro. The first one shows Punta Maya L/H located near the port of Matanzas. Next is Punta de Maternillos L/H located on the north east coast of Cuba on the Old Bahama Channel. Finally, we have a postmark that shows a lighthouse keeper lighting an oil lamp with a Fresnel lens in the background. 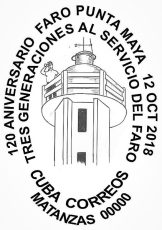 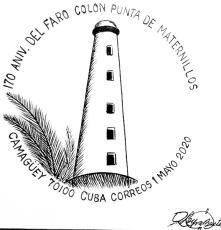 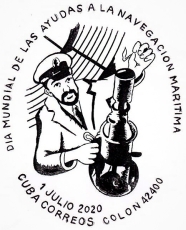 On 1 April 2017 Cuba released a set of 4 stamps featuring both birds and lighthouses as shown below.

The first stamp shown shows the Cuban lighthouse Faro Colón. This is the tallest lighthouse in Cuba and is also known as Punta Maternillos lighthous. It is located near the port of Nuevitas on Cuba’s north coast.

Next is Elbow Cay lighthouse in the Bahamas. Elbow Cay light is also known as Elbow Reef Lt., Hope Town Lt. and Great Abaco Lt. It is very distinctive with it’s red and white horizontal bands.

Punta Faragoza Lt, also known as Punta Zaragoza is located on the north shore of Isla Margarita in Venezuela and is another red and white banded lighthouse.

California (or Noordwestpunt) Lighthouse is shown at the bottom, here. It is located near the northern point of Aruba and gets the name California from a ship that wrecked near the site in the 19th century. 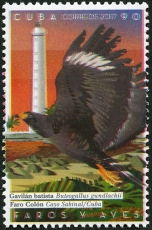 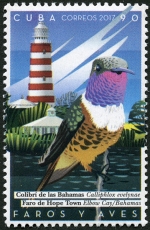 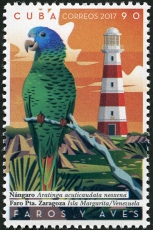