On 23 Oct 2019, Turkey released a set of two stamps featuring marbling art. The second of these two stamps shows the iconic Kiz Kulesi Lighhtouse. It is also known as Maiden’s Tower and Leander’s Tower and is featured on many Turkish stamps.

Click here to see many more lighthouse stamps from Turkey

On 14 Nov 2014 Turkey issued a stamp commemorating 100 years of Turkish cinema. A stylized image of Kiz Kulesi is visible near the center of the stamp between the towers of the bridge. Kis Kulesi which is also know as the Maiden’s Tower and sometimes mistakenly as Leander’s Tower is locate on a small island at the southern end of the Bosphorus just off shore from Istanbul. 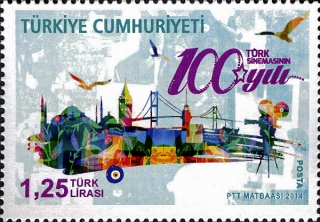