Please excuse the delay in getting this posted. There is a lot going on in my life right now. I’ll try to be more  prompt in the future.

The next four stamps in the 2019 booklet are shown below. 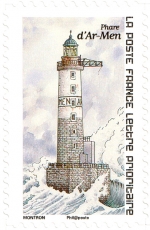 Ar-Men Lighthouse is located on a reef of the coast of France, southwest of the port of Brest. It was very difficult to build due to it’s location in the open sea. It has been the subject of many dramatic photographs during very rough weather when the waves break over the tower. It has withstood the test of time, however, since it was first illuminated in 1881.

Farther south along the coast we find the Île du Pilier Lighthouses located on another offshore island. The inactive original light was built in 1827 and was replaced by the new square tower in 1877 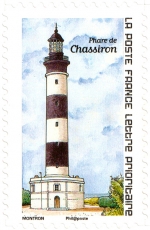 Chassiron Lighthouse built in 1836 is located on Île d’Oléron near the town of St. Denis d’Oléron on the southern Atlantic coast of France. 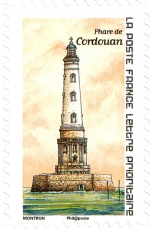 The last stamp on this pane depicts the famous Cordouan Lighthouse which dates from 1611 and is the oldest lighthouse in France. See the final issue of the Philatelic Beacon for more information about this grand lighthouse.