Montauk Point Lighthouse, J0690, was established in 1797 and stands at the eastern most point of Long Island, east of New York City.

The Navesink twin lights are shown on this stamp. They were established in 1862 and only the North Tower, J1032, also known as Highlands Lighthouse is still active. These lighthouses stand on the New Jersey Shore south of New York Harbor.

Erie Harbor Lighthouse has stood  on the end of the north pierhead at the entrance to Erie Harbor on Lake Erie since 1867.

Harbor of Refuge Lighthouse, J1280, is a more recent lighthouse, having been built in 1926. It stands on the south end of a long offshore breakwater that protects the harbor of Lewes, Delaware at the entrance to Delaware Bay.

Thomas Point Shoal Lighthouse, J2204, has been an active lighthouse in Chesapeake Bay since 1875. This is one of the few screwpile lighthouses remaining in the United States and is located near Annapolis, Maryland. 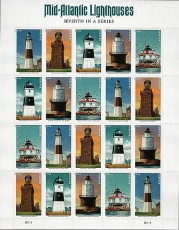 These stamps are only available in sheets of 20 though first day covers are also available from the Postal Service. 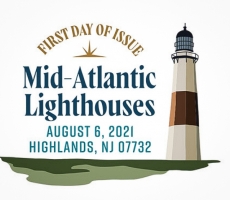 Correo Uruguayo issued a mini-sheet to commemorate World Tourism Day – Rural Development on 30 Sept 2020. While none of the stamps depicts a lighthouse, Cabo Polonio Lighthouse is shown at the lower right part of the sheet. This lighthouse, built in 1881, is a major approach light at the northern entrance to the Rio de la Plata 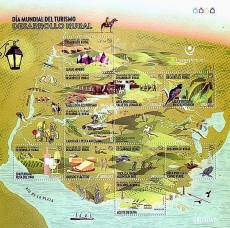