On 20 April 2018 Lietuvos paštas issued a set of two stamps depicting bridges. One of these stamps also shows Klaipéda Rear Range Light. This light should be familiar as it was featured on Lithuanian stamps in 2012 and 2013. 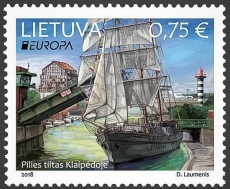 On 29 April 2017 Lietuvos Paštas released a set of two stamps featuring ancient castles. One of the stamps shows the 13th century Klaipėda Castle, also called Memel Castle. In the lower center of the stamp we see what is know as a torch beacon or swape. It consists of a basket of burning coals suspended from a pole and marks the channel entrance to a harbor near the castle. The stamp is based on a 17th century drawing of the area. I would say that we have come a long way in aid to navigation technology! 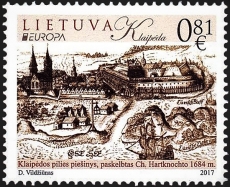