On 14 March 2019 Eesti Post released the latest in it’s long-running series of lighthouse stamps. This one depicts Osumssaare Lighthouse which is located on an island in northwestern Estonia. This is an important lighthouse marking the southern entrance to the Gulf of Finland from the Baltic Sea. The previous light was destroyed during World War II and the current one was built in 1954. 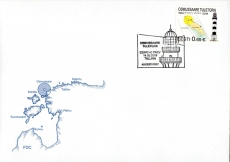 This entry was posted in Lighthouses, Stamps and tagged Estonia. Bookmark the permalink.