The fifth (and final) issue of the 2019 Beautiful Netherlands stamps depicting the lighthouses of the Frisian Islands was issued by PostNL on 20 May 2o19. This one features both the Schiermonnikoog Lighthouse and the Schiermonnikoog South Lighthouse. The south lighthouse has been inactive since 1909 and has served as both a communications tower and a water tower in later years. The active red-painted light was built in 1854 and shows both a flashing white light and steady white or red directional light depending on the direction from which it is observed. Both lights are located near the western end of Schiermonnikoog Island.

Concurrent with this issue, PostNL also issued a minisheet of five stamps featuring the five lighthouses depicted on the 2019 Beautiful Netherlands series. 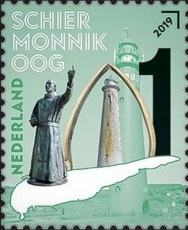 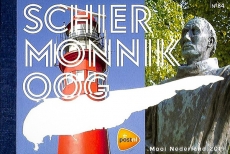 This entry was posted in Lighthouses, Stamps and tagged Netherlands. Bookmark the permalink.