Denmark has issued a sheet of Christmas seals for 2020 that includes two lighthouses. The third seal on the top row has a stylized version of Hanstholm Lighthouse located on Denmark’s northern coast marking the entrance to the Skagerrak and the Baltic Sea. The second lighthouse is on the last stamp in the third row which shows Kronborg Castle located on Denmark’s east coast north of the city of Copenhagen. The tower at the lower right of the sheet which I had thought was a lighthouse is not. 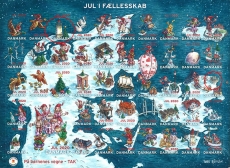 This is a Cinderella stamp but is interesting nonetheless. The American Lung Association has been issuing charity seals at Christmastime for many years and here we see one of the latest in the series which was issued in 2016. Like the one issued in 1941 and shown below it features a stylized lighthouse. 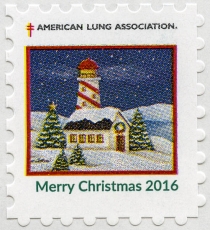 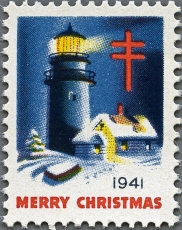